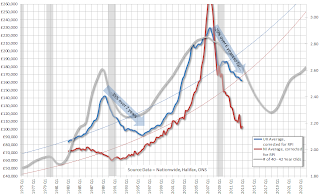 Mixed results this quarter for house prices. In real terms, (non-seasonally adjusted) prices reported by Nationwide fell by £700 this quarter for the UK as a whole. For Halifax, the same figure is an increase of £800.

For Northern Ireland, the average of Nationwide and Halifax figures show an increase of £2600! One swallow does not a summer make, so I await to see if the trend remains for more than one quarter. You can see from the long-term graph that price changes tend to be slow and that trends can only be established over periods of years, not months.

I've updated the graph a little to show current house price "crash" vs. the previous one in the 90s. In both cases, "crash" is an exaggeration - it's really just a long-term correction and only visible if prices are viewed in real terms.

I'm still waiting to see what happens with the government's various house price supports ("Funding for Lending" and "Help to Buy"). Interest rates are also something of a wildcard - they can be kept artificially low by the bank, but lending rates are largely determined by the broader market, namely inter-bank lending and gilt yields. If banks get jittery again, the former will increase because banks will be wary of lending to one another and if the market becomes worried about the UK government's ability to pay its debts, the gilt yield will increase, raising mortgage rates.

Summary: UK House prices are back to their 2003 level. I continue to save a deposit in various assets..
House Prices 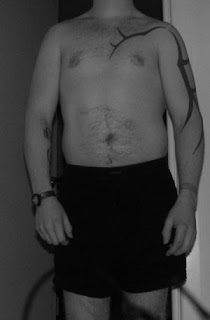