I've previously mentioned that I found an interesting correlation between the population and house prices.

The other major factor in house prices is how much people are able to pay. Note that this is different from how much they are willing to pay. Unlike almost everything else we buy (with perhaps the exception of cars, but the PoundCounter view is that cars should be bought with cash), very few houses are bought with cash.

People borrow money to pay for them, therefore the amount they can borrow largely defines (or limits) how expensive houses get.

Although many people may think that the interest rate on a mortgage is defined by the Bank of England base rate.

It's defined by the rate at which banks are happy to lend money to earn a profit. Traditionally, the safest place for them to earn money is by lending it to the government. The UK government regularly goes to the market to ask for money, which it promises to repay with interest. It's this interest rate that determines interest rates in the wider marketplace, including the mortgage market.

Using data from 1975 from Halifax, Nationwide, the ONS and the Bank of England, I've come up with a model that I think provides an idea of the fair value of UK houses: 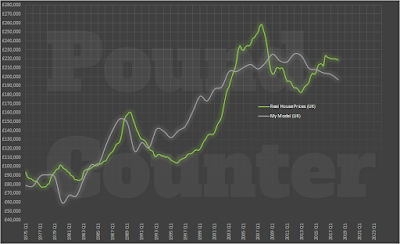 The green line is the real (i.e. corrected for inflation) UK house price, based on the Halifax and Nationwide indices.

The grey line is my model.

I think the model works quite well, given the simplicity of its inputs.

It "predicted" the crashes in 1980 and 1990. It "explains" the house price boom from 1996 because house prices were too cheap, but the population and cost of mortgages suggested it should drive higher. It warned that houses were getting too expensive in 2004 and that they were becoming undervalued in 2013.

So what does it say now?

It suggests that UK house prices are a little high, but not excessive. They don't usually start to fall until prices are £40k - £50k higher than the model. On the other hand, the model seems to be turning down.

In fact, we can hypothesise what might happen in the future... 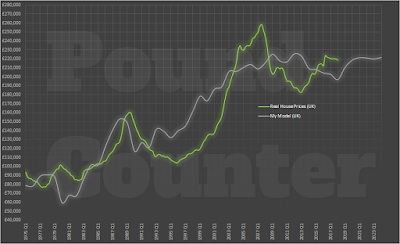 If interest rates stay the same, the grey line shows what house prices should do. On the one hand, the government will do whatever it can to keep interest rates down. On the other hand, how long can that go on and when will investors who lend it money demand higher interest payments?

If interest rates normalise to their average rate since 1975 (about 7%), here is the likely effect on the UK housing market (slowly increasing to 7% by 2023): 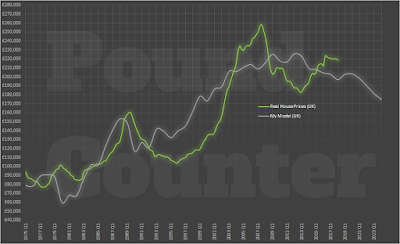 Obviously, all models are simplified by necessity. My model doesn't take into account things like Brexit or the public sentiment on buying a house. Back in the early 2000's, everyone was banging on about buying a house, after all, they had increased in price continuously for 15 years - what could go wrong? How could they ever not go up?

Let's take a look at somewhere they definitely stopped going up - Northern Ireland: 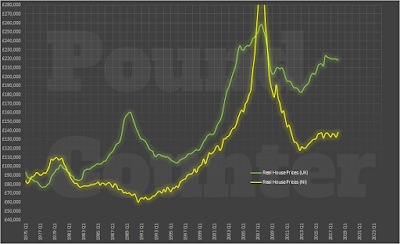 House prices in the UK and Northern Ireland were similar until about 1981. This is almost certainly due to the deteriorating situation in NI at the time.

They continued to be subdued until about 1994, which could be considered the start of the Peace Process.

They started to accelerate after the Good Friday Agreement in 1998, by which time the UK was swept up in house price mania.

With such a low starting point, and potential buyers over the border in Dublin struggling to buy, Northern Ireland and especially Belfast became massively overpriced as people got carried away...

From such a low level, house prices overshot the UK on the way up and on the way down.

In summary - house prices on a UK-wide basis are a little high, but you'd need to examine each region to get a better idea. As always, UK-wide prices are massively biased by London and anywhere within commuting distance.

*The exception is obviously base rate trackers, but even they are defined to an extent by the prevailing market conditions. Higher interest rates in the government lending markets will be reflected by larger differences in base rate trackers vs. the bank's base rate.
House Prices

April 04, 2020
Given the current situation, you need to get creative with workouts! Here, Karen from Lift-Wellbeing  and I are doing a pullup / chinup routine. I do weighted, so I'm using a dipping belt, holdall and sandbags to increase the weight. Pretty pleased that I'm still able to maintain / build strength while stuck at home! You could do the same using a chinup bar mounted in or on a door, but be very careful about the total weight the bar and/or door can take! This stand is rated to 120kg, so it can easily handle me (60kg) and 30kg of sandbags! Music: https://www.bensound.com/royalty-free-music
Read more

I've chosen an image by Escher for today's post because I hope it will provide you with a different way of looking at something, namely inflation. Inflation is most often defined as the rise in price of goods and services over time. However, its less often quoted meaning is the loss of value of the currency . It's this second meaning that is more representative of what inflation truly is. I strongly believe the first definition is misleading, perhaps deliberately so, as we shall see. We have become so accustomed to living in a society that uses money that we often take its units of measurement, be they Pounds, Dollars or Euros, as fixed, much like distances like metres and weights like kilograms. In reality, they are units of exchange and are thus subject to the laws of supply and demand. Think back to a time before money. Perhaps a wheat farmer wanted some meat for his meal. He might exchange a bushel of wheat in the local town for a pig. One year, pork is partic
Read more