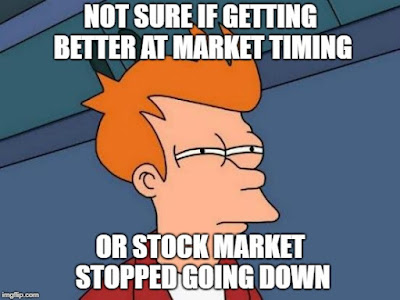 I've previously mentioned that I experimented with market timing to determine when to buy/sell stocks. See my posts on the topic - here, here, here and here.

That theory, and those indicators, was based on some simple backtesting I did with a few large indices, such as the S&P500 and FTSE, for which I was able to easily plot and get data for using Google Finance. Sadly, Google seem to have removed all their lovely charts and data, presumably under pressure from financial companies who earn money for providing data that Google was providing for free.

In any case, the backtesting I did at that time was manual - i.e. I would follow the graph and make a note of the trades once the indicators were hit.

I wanted to automate this process to make it easier to test different timings, so I made an epic spreadsheet (and learned some new Excel skills along the way): 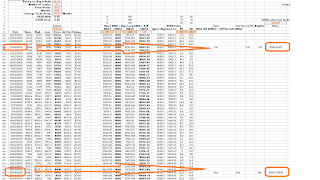 Here's an extract of an exponential moving average and SSTO (slow stochastic) to indicate when to buy and when to sell the Dow Jones (DJI).

The reason I was so interested was that this method avoids the large market drawdowns seen in the recent 2000 and 2007 crashes. You can see in the screenshot that this strategy gets out of the market near the top and gets back in near the bottom. It also beats a buy and hold strategy, generating a 9.9% annual return vs. 9.4% for buy and hold.

Sadly, I also found that the timings are specific for every market. When I applied the timings that worked on the DJI, they didn't work on the S&P (another large US index) or the MSCI World.

Each market had its own very specific timings that were needed to beat simply buying the market and holding it through all the ups and downs.

I had hoped that because:


I would be able to find a decent long-term indicator (e.g. the 144 week exponential moving average) that would allow those of us with small holdings who can sell in an instant avoid the long bear market period and buy back in near the low.

Sadly, this proved not to be the case.

They found that, out of more than a million market-timing strategies, 0.2% beat buy and hold.

April 04, 2020
Given the current situation, you need to get creative with workouts! Here, Karen from Lift-Wellbeing  and I are doing a pullup / chinup routine. I do weighted, so I'm using a dipping belt, holdall and sandbags to increase the weight. Pretty pleased that I'm still able to maintain / build strength while stuck at home! You could do the same using a chinup bar mounted in or on a door, but be very careful about the total weight the bar and/or door can take! This stand is rated to 120kg, so it can easily handle me (60kg) and 30kg of sandbags! Music: https://www.bensound.com/royalty-free-music
Read more

I've chosen an image by Escher for today's post because I hope it will provide you with a different way of looking at something, namely inflation. Inflation is most often defined as the rise in price of goods and services over time. However, its less often quoted meaning is the loss of value of the currency . It's this second meaning that is more representative of what inflation truly is. I strongly believe the first definition is misleading, perhaps deliberately so, as we shall see. We have become so accustomed to living in a society that uses money that we often take its units of measurement, be they Pounds, Dollars or Euros, as fixed, much like distances like metres and weights like kilograms. In reality, they are units of exchange and are thus subject to the laws of supply and demand. Think back to a time before money. Perhaps a wheat farmer wanted some meat for his meal. He might exchange a bushel of wheat in the local town for a pig. One year, pork is partic
Read more

I haven't update my UK house price graph for a while, but this time, I thought I'd also include my attempt at modelling it. I've previously   mentioned that I found an interesting correlation between the population and house prices. In a very simplistic way, this makes sense. The UK is a fixed size, but its population is increasing, therefore prices go up. This is certainly the headline that's repeated endlessly on mainstream media. However, the subtlety that not everyone buys houses is lost in the noise. I doubt anyone under the age of 18 or over the age of 75 is buying houses for example. These days, it's also safe to assume that very few people under the age of 30 are either. (The average age of a first time buyer is now 30, compared with 23 in the 1960's.) The other major factor in house prices is how much people are able to pay. Note that this is different from how much they are willing to pay. Unlike almost everything else we buy (with perha
Read more